When are there continuous choices for the Mean Value Abscissa?

Miles Wheeler and I have recently uploaded a paper to the arXiv called "When are there continuous choices for the mean value abscissa?", which we have submitted to an expository journal. The underlying question is simple but nontrivial. Later Update: this paper was published in the American Mathematical Monthly in 2021, and won the 2022 Halmos-Ford award.

The mean value theorem of calculus states that, given a differentiable function $f$ on an interval $[a, b]$, then there exists a $c \in (a, b)$ such that $$ \frac{f(b) - f(a)}{b - a} = f'(c).$$ We call $c$ the mean value abscissa. Our question concerns potential behavior of this abscissa when we fix the left endpoint $a$ of the interval and vary $b$. For each $b$, there is at least one abscissa $c_b$ such that the mean value theorem holds with that abscissa. But generically there may be more than one choice of abscissa for each interval. When can we choose $c_b$ as a continuous function of $b$? That is, when can we write $c = c(b)$ such that $$ \frac{f(b) - f(a)}{b - a} = f'(c(b))$$ for all $b$ in some interval? We think of this as a continuous choice for the mean value abscissa.

This is a great question. It's widely understandable — even to students with only one semester of calculus. Further it encourages a proper understanding of what a function is, as thinking of $c$ as potentially a function of $b$ is atypical and interesting.

But I also like this question because the answer is not as simple as you might think, and there are a few nice ideas that get to the answer.

Should you find yourself reading this without knowing the answer, I encourage you to consider it right now. Should continuous choices of abscissas exist? What if the function is really well-behaved? What if it's smooth? Or analytic?

Let's focus on the smooth question. Suppose that $f$ is smooth — that it is infinitely differentiable. These are a distinguished class of functions. But it turns out that being smooth is not sufficient: here is a counterexample. 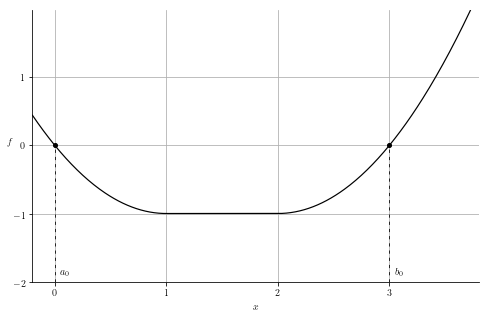 In this figure, there are points $b$ arbitrarily near $b_0$ such that the secant line from $a_0$ to $b$ have positive slope, and points arbitrarily near such that the secant lines have negative slope. There are infinitely many mean value abscissae with $f'(c_0) = 0$, but all of them are either far from a point $c$ where $f'(c) > 0$ or far from a point $c$ where $f'(c) < 0$. And thus there is no continuous choice.

From a theorem oriented point of view, our main theorem is that if $f$ is analytic, then there is always a locally continuous choice. That is, for every interval $[a_0, b_0]$, there exists a mean value abscissa $c$ such that $c = c(b)$ for some interval $B$ containing $b_0$.

But the purpose of this article isn't simply to prove this theorem. The purpose is to exposit how the ideas that are used to study this problem and to prove these results are fundamentally based only on a couple of central ideas covered in introductory single and multivariable calculus. All of this paper is completely accessible to a student having studied only single variable calculus (and who is willing to believe that partial derivatives exist are a reasonable object).

We prove and use simple-but-nontrivial versions of the contraction mapping theorem, the implicit function theorem, and Morse's lemma.

The implicit function theorem is enough to say that any abscissa $c_0$ such that $f''(c_0) \neq 0$ has a unique continuous extension. Thus immediately for "most" intervals on "most" reasonable functions, we answer in the affirmative.

Morse's lemma allows us to say a bit more about the case when $f''(c_0) = 0$ but $f'{}'{}'(c_0) \neq 0$. In this case there are either multiple continuous extensions or none. And a few small ingredients and the idea behind Morse's lemma, combined with the implicit function theorem again, is enough to prove the main result.

A calculus student looking for a project to dive into and sharpen their calculus skills could find ideas here to sink their teeth into. Beginning by understanding this paper is a great start. A good motivating question would be to carry on one additional step, and to study explicitly the behavior of a function near a point where $f''(c_0) = f'{}'{}'(c_0) = 0$, but $f^{(4)}(c_0) \neq 0$.

A slightly more open question that we lightly touch on (but leave largely implicit) is ther inverse question: when can one find a mean value abscissa $c$ such that the right endpoint $b$ can be written as a continuous function $b(c)$ for some neighborhood $C$ containing the initial point $c_0$? Much of the analysis is the same, but figuring it out would require some attention.

There is also a nice computational problem. In the paper, we include several plots of solution curves in $(b, c)$ space. But we did this with a meshed implicit function theorem solver. A computationally inclined student could devise an explicit way of constructing solutions.

We made 13 graphs in 5 figures for this article. These pictures were created using matplotlib. The data was created using numpy, scipy, and sympy from within the scipy/numpy python stack, and the actual creation was done interactively within a jupyter notebook. The actual notebook is available here, (along with other relatively raw jupyter notebooks). The most complicated graph is this one. 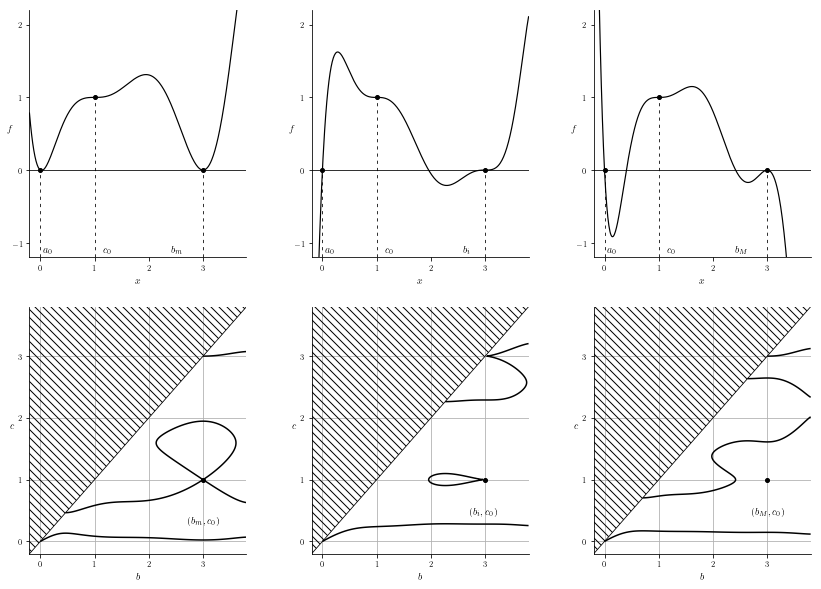 The three graphs along the bottom are in $(b, c)$ space and present all mean value abscissa for each $b$. This is not a function, but the local structure of the graphs are interesting and visually distinct.

The process of making these examples and making these figures is interesting in itself. We did not make these figures explicitly, but instead chose certain points and certain values of derivatives at those points, and used Hermite interpolation find polynomials with those points.1 1Actually, since our polynomials are not of large degree, we wrote a sort of naive Hermite interpolator in sympy and had sympy bruteforce solve for the polynomial. Arguably it would be both faster and easier to encode the problem as a linear system of equations and use a fast matrix solver... but we didn't do that.

In the future I plan on writing a note on the creation of these figures.2 2This is now done! See Choosing functions and generating figures... for more.