I moved to the UK to begin a postdoc with John Cremona at the University of Warwick. And for the last four weeks, I have had no internet at my home. This wasn’t by choice — it’s due to the reluctance of my local gigantitelecom to press a button that says “begin internet service.” I could write more about that, but that’s not the purpose of this note.

The purpose of this note is to describe the large effects of having no internet at my home for the last four weeks. I’m at my home about half the time, leading to the title. 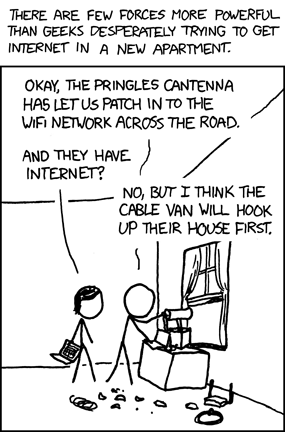 I have become accustomed to having the internet at all times. I now see that many various habits of mine involved the internet. In the mornings and evenings, I would check HackerNews, longform, and reddit for interesting reads. Invariably there are more interesting seeming things than I would read, and my Checkout bookmarks list is a hundreds-of-items long growing list of maybe interesting stuff. In the middle times throughout the day, I would checkout a few of these bookmarks.

All in all, I would spend an enormous amount of time reading random interesting tidbits, even though much of this time was spread out in the “in-betweens” in my day.

When I didn’t have internet at my home, I had to fill all those “in-between” moments, as well as my waking and sleeping moments, with something else. Faced with the necessity of doing something, I filled most of these moments with reading books. Made out of paper. (The same sort of books whose sales are rising compared to ebooks, contrary to most predictions a few years ago).

I’d forgotten how much I enjoyed reading a book in large chunks, in very few sittings. I usually have an ebook on my phone that I read during commutes, and perhaps most of my idle reading over the last several years has been in 20 page increments. The key phrase here is “idle reading”. I now set aside time to “actively read”, in perhaps 100 page increments. Reading enables a “flow state” very similar to the sensation I get when mathing continuously, or programming continuously, for a long period of time. I not only read more, but I enjoy what I’m reading more.

As a youth, I would read all the time. Fun fact: at one time, I’d read almost every book in the Star Wars expanded universe. There were over a hundred, and they were all canon (before Disney paved over the universe to make room). I learned to love reading by reading science fiction, and the first novel I remember reading was a copy of Andre Norton’s “The Beastmaster” (… which is great. A part telepath part Navajo soldier moves to another planet. Then it’s a space western. What’s not to love?).

My primary source of books is the library at the University of Warwick. Whether through differences in continental taste or simply a case of different focus, the University Library doesn’t have many books in its fiction collection that I’ve been intending to read. I realize now that most of the nonfiction I read originates on the internet, while much of the fiction I read comes from books. Now, encouraged by a lack of alternatives, I picked up many more and varied nonfiction books than I would otherwise have.

As an unexpected side effect, I found that I would also carefully download some of the articles I identified as “interesting” a bit before I headed home from the office. Without internet, I read far more of my checkout bookmarks than I did with internet. Weird. Correspondingly, I found that I would spend a bit more time cutting down the false-positive rate — I used to bookmark almost anything that I thought might be interesting, but which I wasn’t going to read right then. Now I culled the wheat from the chaff, as harvesting wheat takes time. (Perhaps this is something I should do more often. I recognize that there are services or newsletters that promise to identify great materials, but somehow none of them have worked better to my tastes than hackernews or longform. But these both have questionable signal to noise.).

The result is that I’ve goofed off reading probably about the same amount of time, but in fewer topics and at greater depth in each. It’s easy to jump from 10 page article to 10 page article online; when the medium is books, things come in larger chunks.

I feel more productive reading a book, even though I don’t actually attribute much to the difference. There may be something to the act of reading contiguously and continuously for long periods of time, though. This correlated with an overall increase my “chunking” of tasks across continuous blocks of time, instead of loosely multitasking. I think this is for the better.

I now have internet at my flat. Some habits will slide back, but there are other new habits that I will keep. I’ll keep my bedroom computer-free. In the evening, this means I read books before I sleep. In the morning, this means I must leave and go to the other room before I waste any time on online whatevers. Both of these are good. And I’ll try to continue to chunk time.

To end, I’ll note what I read in the last month, along with a few notes about each.

From best to worse.

I’m currently reading Confusion by Neal Stephenson, book two of the Baroque trilogy. Right now, I am exactly 1 page in.

I rank these from those I most enjoyed to those I least enjoyed.

I’m now reading Grit, by Angela Duckworth. Another side effect of reading more is that I find myself reading one fiction, one non-fiction, and one “simple” book at the same time.

Written while on a bus without internet to Heathrow, minus the pictures (which were added at Heathrow).