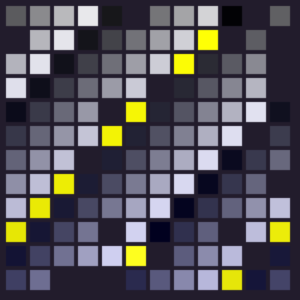 Tom Hulse, Chan Ieong Kuan, Alex Walker, and I have just uploaded a new paper to the arXiv titled A Shifted Sum for the Congruent Number Problem. In this charming, short paper, we investigate a particular sum of terms which are products of square-indicator functions and show that its asymptotics are deeply connected to congruent numbers. This note serves to describe and provide additional context for these results. (This note is also available as a pdf).

There is mythology surrounding rational right triangles. According to legend, the ancient Greeks, led both philosophcally and mathematically by Pythagoras (who was the first person to call himself a philosopher and essentially the first to begin to distill and codify mathematics), believed all numbers and quantities were ratios of integers (rational). When a disciple of Pythagoras named Hippasus found that the side lengths of the right triangle $(1, 1, \sqrt{2})$ were not rational multiples of each other, the other followers of Pythagoras killed him by casting him overboard while at sea for having produced an element which contradicted the gods. (It with some irony that we now attribute this as a simple consequence of the Pythagorean Theorem).

This mythology is uncertain, but what is certain is that even the ancient Greeks were interested in studying rational right triangles, and they began to investigate what we now call the Congruent Number Problem. By the year 972 the CNP appears in Arabic manuscripts in (essentially) its modern formulation. The Congruent Number Problem (CNP) may be the oldest unresolved math problem.

We call a positive rational number $t$ congruent if there is a rational right triangle with area $t$. The triangle $(3,4,5)$ shows that $6 = 3 \cdot 4 / 2$ is congruent. The CNP is to describe all congruent numbers. Alternately, the CNP asks whether there is an algorithm to show definitively whether or not $t$ is a congruent number for any $t$.

We can reduce the problem to a statement about integers. If the rational number $t = p/q$ is the area of a triangle with legs $a$ and $b$, then the triangle $aq$ and $bq$ has area $tq^2 = pq$. It follows that to every rational number there is an associated squarefree integer for which either both are congruent or neither are congruent. Further, if $t$ is congruent, then $ty^2$ and $t/y^2$ are congruent for any integer $y$.

It is in this form that we consider the CNP today.

Congruent Number Problem Given a squarefree integer $t$, does there exist a triangle with integer side lengths such that the squarefree part of the area of the triangle is $t$?

We should be careful to note that this does not solve the CNP, since the error term depends in an inexplicit way on the desired number $t$. What this really means is that we do not have a good way of recognizing when the first nonzero term should occur in the double sum. We can only guarantee that for any $t$, understanding $S_t(X)$ for sufficiently large $X$ will allow one to understand whether $t$ is congruent or not.

There are four primary components to this result:

I would further conjecture that the error term in our asymptotic is essentially best-possible, even though we have thrown away some information in our proof.

We are not the first to note either the bijection between triangles $T$ and arithmetic progressions of squares or between triangles $T$ and points on a particular elliptic curve. The first is surely an ancient observation, but I don't know who first considered the relation to elliptic curves. But it's certain that this was a fundamental aspect in Tunnell's famous work A Classical Diophantine Problem and Modular Forms of Weight 3/2 from 1983, where he used the properties of the elliptic curve $E_t$ to relate the CNP to the Birch and Swinnerton-Dyer Conjecture.

One statement following from the Birch and Swinnerton-Dyer conjecture (BSD) is that if an elliptic curve $E$ has rank $r$, then the $L$-function $L(s, E)$ has a zero of order $r$ at $1$. The relation between lots of points on the curve and the existence of a zero is intuitive from the approximate relation that \begin{equation} L(1, E) \approx \lim_{X} \prod_{p \leq X} \frac{p}{\#E(\mathbb{F}_p)}, \end{equation} so if $E$ has lots and lots of points then we should expect the multiplicands to be very small.

On the other hand, the elliptic curve $E_t: y^2 = x^3 - t^2 x$ has the interesting property that any point with $y \neq 0$ generates a free group of points on the curve. From the bijections alluded to above, a primitive right integer triangle $T$ with $\sqfree(T) = t$ corresponds to a point on $E_t$ with $y \neq 0$, and thus guarantees that there are lots of points on the curve. Tunnell showed that what I described as 'lots of points' is actually enough points that $L(1, E)$ must be zero (assuming the relation between the rank of the curve and the value of $L(1, E)$ from BSD).

Yet for any elliptic curve we know how to compute $L(1, E)$ to guaranteed accuracy (for instance by using Dokchitser's algorithm). Thus a corollary of Tunnell's theorem is that BSD implies that there is an algorithm which can be used to determine definitively whether or not any particular integer $t$ is congruent.

This is the state of the art on the congruent number problem. Unfortunately, BSD (or even the somewhat weaker between BSD and mere nonzero rank of elliptic curves as is necessary for Tunnell's result for the CNP) is quite far from being proven.

In this context, the main result of this paper is not as effective at actually determining whether a number is congruent or not. But it does have the benefit of not relying on any unknown conjecture.

It may be possible to gain further understanding of the behavior of $S_t(X)$ (and therefore the congruent number problem) by studying the shifted convolution as coming from theta functions.

I would guess that there is a deep relation to Tunnell's analysis in his 1983 paper, as in some sense he constructs appropriate products of three theta functions and uses them centrally in his proof. But I do not understand this relationship well enough yet to know whether it is possible to deepen our understanding of the CNP, BSD, or Tunnell's proof. That is something to explore in the future.