This is a post written towards my students in Calc II, Math 100 at Brown University, fall 2013. There will be many asides, written in italics. They are to serve as clarifications of method or true asides, to be digested or passed over.

The semester is over. All the grades are in and known, fall 2013 draws to a close. As you know, I'm interested in the statistics behind the course. I'd mentioned my previous analysis about the extremely high correlation between first midterm and final grade (much higher than I would have thought!). Let's reveal the statistics and distribution of this course.

Unlike last year, we'll be examining the data for the overall class (about 200 students). This is large enough that I feel the numbers might really mean something. Here is the distribution of the final grades in the class (final grades, not the grades on the final exam). The horizontal axis indicates final grade, and the vertical axis indicates the number of students receiving that grade. 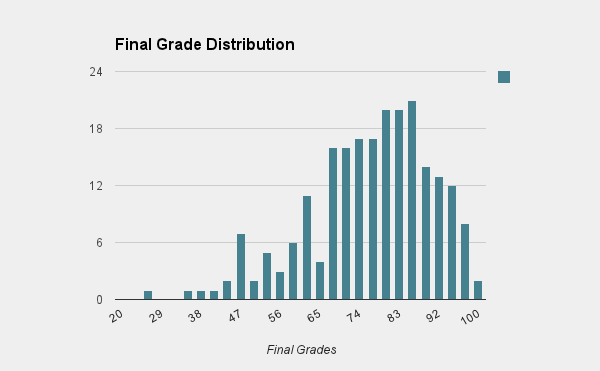 The highest overall grade was a 99.5%, which is an incredible grade. From the picture, you can see that the distribution is roughly normal (Gaussian), slightly skewed. Most people did pretty well. The overall mean was about a 75% with 14% standard deviation. The median was about a 78%. (My two sections were each a bit above the overall average, approximately 3 points higher. Discounting two outliers, which we had, it ends up being about 5 points higher. While nice, these are not statistically significant - one might assume this would happen purely by chance and completely independent of being in my section about 4 times out of 10).

Many times throughout the course, I estimated that an A would be a bit above half a standard deviation above mean, and passing would be roughly one standard deviation below mean, and the B/C line would be roughly in the middle, but harder to say. So the going heuristics going into the final were an A being somewhere between an 82 and an 85, a B being somewhere around 72, and passing to be somewhere around 60.

It is because I expect the class to fall roughly along a normal distribution that I give such heuristics in terms of standard deviations. This suggests that the class is graded on a curve, but in fact this is not the case! By this, I mean that the final grade decisions are based on other criteria, fundamentally different than standard deviations. By I stand by my standard deviations heuristics! By the way, these should work in most classes at Brown, not just this one. Better heuristics would become available to you after learning a little statistics). 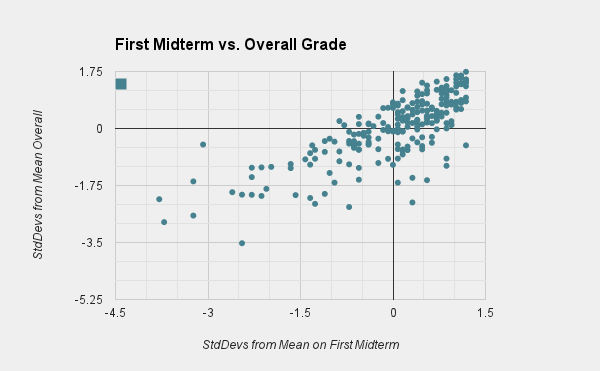 Firstly, it's very linear with pretty strong correlation. If you're familiar with statistics, the correlation coefficient was 0.778, which is extremely high. This suggests that one can say a lot about a student's overall grade as early as the first midterm, which I find sort of surprising. In other words, those who start ahead stay ahead, and those who fall behind don't catch up, on average.

A suggestion to take to heart here is to not fall behind at the start - it's very painful and atypical for students to catch up afterwards. This might be because of the strong cumulative nature of mathematics, although I don't actually thing that's true of this course. 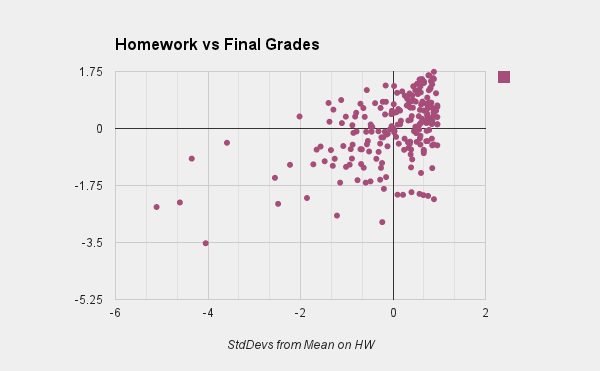 In contrast, this graphic displays standard deviations compared to mean of HW (horizontal) vs. final grade (vertical). This is a lousy correlation (the correlation coefficient is about .44, which is a very weak correlation). This doesn't surprise me, since

Although I don't put the graphs here, I should note other poor indicators. Recitation attendance provided no meaningful information since essentially every student showed up to essentially every recitation. Those who missed more than 3 recitations did significantly worse than those who missed at most 2, but this is more likely evidence of differently-placed priorities than anything absorbed during recitation. Quiz grades had a weak positive correlation with final grades. More interestingly, each student's quiz grade stayed largely constant throughout the semester - likely indicating how much pre-studying each student would do prior to each recitation.

All in all, I would distill two messages from these statistics. Firstly, don't fall behind at the beginning, since performance roughly 1 month in is a great predictor of overall performance - each semester, there are students who convince themselves they'll catch up before the final, but they don't on average (or often at all).

Secondly, even though Brown classes may not be graded on curves/by distribution (like this one), normal distributions allow for extremely accurate predictions of student grades, i.e. it is almost as if you were, in fact, graded on a bell curve.

I won't be posting the final or its solution to this site by external request (they don't want to establish a question bank... although this does not prevent some enterprising students from setting up a student-run repository, which would be relatively easy to do), though you can schedule a time with your lecturer to see the final, its solution, and/or your grade at your leisure.

As usual, if you have questions, feel free to let me know. Other than that, have a happy new year, and may you stumble across something that interests you all.