Let's consider a ridiculous solution to a real problem. We're unearthing tons of carbon, burning it, and releasing it into the atmosphere.

Disclaimer: There are several greenhouse gasses, and lots of other things that we're throwing wantonly into the environment. Considering them makes things incredibly complicated incredibly quickly, so I blithely ignore them in this note.

Such rapid changes have side effects, many of which lead to bad things. That's why nearly 150 countries ratified the Paris Agreement on Climate Change.1 1Including the US and China (the two largest contributors), as well as the EU. Even if we assume that all these countries will accomplish what they agreed to (which might be challenging for the US),2 2Scientist and energy companies urge Trump to stay in the agreement, but Trump has already begun to undo efforts on managing climate change. 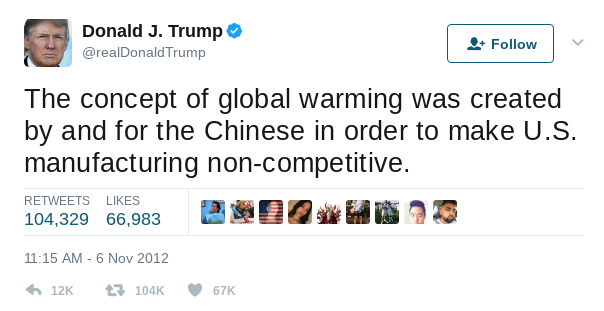 most nations and advocacy groups are focusing on increasing efficiency and reducing emissions. These are good goals! But what about all the carbon that is already in the atmosphere?3 3You can even check the most up-to-date readings.

You know what else is a problem? Obesity! How are we to solve all of these problems? 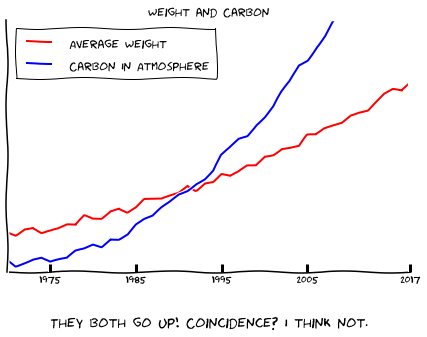 Looking at this (very unscientific) graph,4 4No really, the data is made up. But the trends are more or less true — I bet you believed it, didn't you? we see that the red isn't keeping up! Maybe we aren't using the valuable resource of our own bodies enough! Fat has carbon in it — often over 20% by weight. What if we took advantage of our propensity to become propense? How fat would we need to get to balance last year's carbon emissions?

That's what we investigate here.

We need some data. It turns out that, despite knowing that we put a lot of carbon into the atmosphere, I don't have any idea how much a lot actually is. Usually it's given in nice, relatable terms that we're supposed to be able to make sense of — like estimates on the number of degrees of warming to expect given a certain amount of emissions. So question number one: how much carbon do we put into the atmosphere? 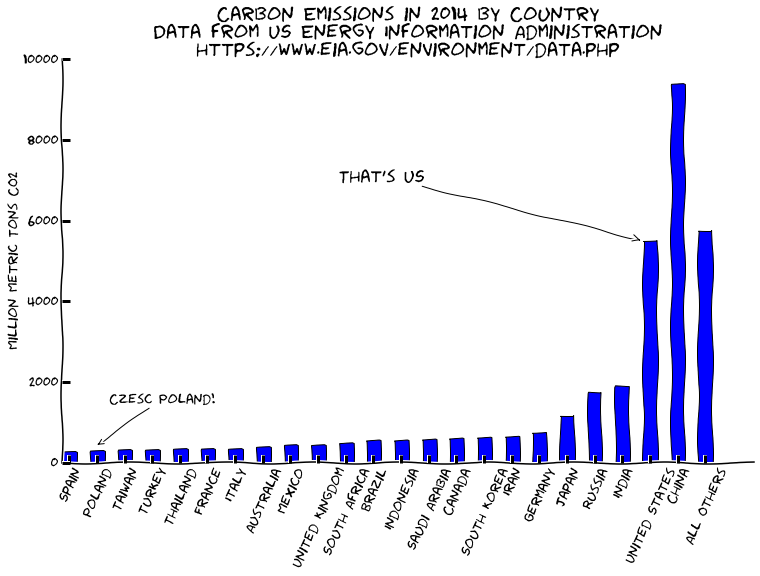 This uses real data from the US Energy Information Association (in the "International Energy Statistics" dataset). This shows the highest carbon contributors from the year 2014 (the year with the most recent complete data. All countries not explicitly displayed are included in "All Others."

What does this tell us?5 5It tells us that the USA uses a lot of fossil fuels. And also that India doesn't use nearly as much per capita as many other countries, among other things. The vertical bars are measured in terms of "Million Metric Tons of CO2". In total, the world released 33716 MMTons CO2.6 6China released 9376 MMTons CO2. The US released 5507 MMTons CO2.

This unit is a bit hard to wrap my head around, MMTon CO2, a million metric ton of CO2. Firstly, we should note that only 9195 MMTons of that is carbon, which is what we're focusing on. To put this in proper perspective, that's 2700 pounds per person alive today (Or 1226 kilograms, for that crowd).7 7Apparently, there are 7.5 billion people alive today. That's the number I'm going with.

So how fat would we need to get to balance one year of carbon emissions? If every man, woman, child, and elder gained a mere 2700 pounds (1226 kilograms!) of pure carbon, we would successfully sequester one year's worth of carbon. 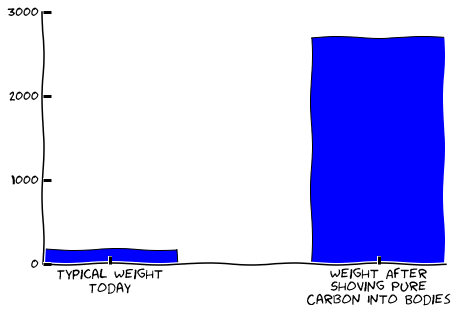 Unfortunately, that means about 13000 pounds (6000 kilograms) of fat, which is a bit much. So the chart really looks like this. 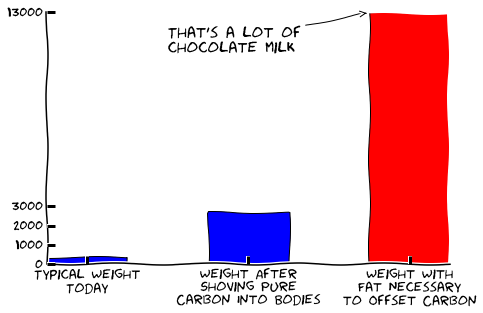 Wow. So this isn't a reasonable carbon sequestration plan.8 8On the other hand, it compares favorably to some of the suggestions out there today. We toss an unbelievable amount of carbon into the atmosphere. According to LiveScience, a fully grown T-Rex could weight as much as 18000 pounds (8160 kilograms). If we assume that the overall body composition of a dinosaur is about the same as a human,9 9Probably not true. But maybe true enough so that roughly 20% of a T-Rex's weight is carbon, then a fully grown T-Rex might have 3590 pounds of carbon within his or her body. This is approximately the same amount of carbon that corresponds to each man, woman, child, and elder's carbon use in 2014.

That's a weird thought. How much carbon did we pull out of the ground and burn in 2014? About the same as if every human dug up a fully grown T-Rex, burned it, and then resumed their normal lives.

I think I'm starting to get a bigger idea of just how daunting a task of large scale carbon sequestration will actually be.  2700 pounds per person per year. Whoa. Let's move away from fat, towards better ideas.

Instead of an elephant a year, every person could plant an oak tree every year. (Actually, it just takes one in every three people). If these trees never died and were able to grow to complete size, then this would also offset carbon emissions. Conversely, when we cut and burn down trees, these release lots and lots and lots of carbon.

Suppose we did this. So this year, we were to plant 2.5 billion oak trees. That's one for every three people on Earth. According to Penn State's Forestry Extension School, a healthy, mature, hardwood forest can have as many as 120 trees per acre. If all 2.5 billion trees were planted at this density together, then this would cover 32552 square miles. The area of South Carolina is 32020 square miles, so we could cover the entire state of South Carolina with newly planted oak trees.10 10Alternately, this is about 1% of the area of Brazil. Given the rate of deforestation of Brazil, these estimates make some sense.

Of course, oak trees are probably not the best choice for a carbon sequestration tree, and there are probably plants that, in optimal growth conditions, hold a much higher carbon per square mile concentration.11 11I wonder: has this been studied? I would be curious to know the answer. Perhaps some trees are three times as effective (a Maryland per year), or maybe even ten times as effective (a Delaware per year).

But that is the magnitude of the effort. Now if you'll excuse me, I'm going to go hug a tree.