When I first learned the mean value theorem as a high schooler, I was thoroughly unimpressed. Part of this was because it's just like Rolle's Theorem, which feels obvious. But I think the greater part is because I thought it was useless. And I continued to think it was useless until I began my first proof-oriented treatment of calculus as a second year at Georgia Tech. Somehow, in the interceding years, I learned to value intuition and simple statements.

In this brief note, I want to consider one small aspect of the Mean Value Theorem: can the 'mean value' be chosen continuously as a function of the endpoints? To state this more clearly, first recall the theorem: 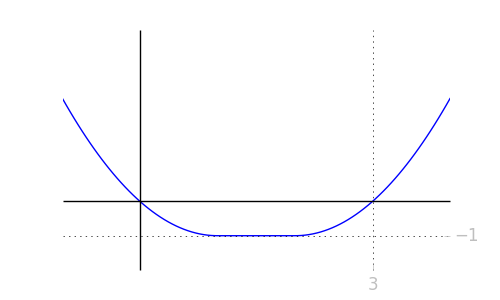 In the gif below, we have animated the process. The red line is the secant line passing through ${(0, f(0))}$ and ${(b, f(b))}$. The two red dots indicate the two points of intersection. The green line is the line guaranteed by the mean value theorem. The small green dot is, in particular, what we've been calling ${c_b}$: the guaranteed mean value. Notice that it jumps when the red dot passes ${3}$. That is the essence of this proof.

Further, although this example is not smooth, it is easy to see that if we 'smoothed' off the connection between the parabola and the straight line, like through the use of bump functions, then the spirit of this counterexample works, and not even smooth functions have locally continuous choices of the mean value.