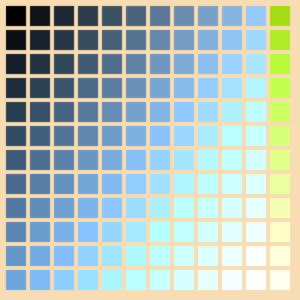 In about a month, Math.StackExchange will turn 8. Way back when I was an undergrad, I joined the site. This was 7 years ago, during the site's first year.

Now with some perspective as a frequent contributor/user/moderator of various online newsgroups and fora, I want to take a moment to examine the current state of Math.SE.

To a certain extent, this is inspired by Joel Spolsky's series of posts on StackOverflow (which he is currently writing and sending out). But this is also inspired by recent discussion on Meta.Math.SE. As I began to collect my thoughts to make a coherent reply, I realized that I have a lot of thoughts, and a lot to say.

So this is chapter one of a miniseries of writings on internet fora, and Math.SE and StackOverflow in particular.

I fondly remember the beginning, when it was possible to read every question and answer that was posted on Math.SE.1 1I barely programmed then, and didn't become more familiar with StackOverflow until a while later I'm not saying this was a good idea, but I was learning lots of middle undergraduate math and this sort of math dominated the site. It felt particularly relevant.

Further, it was so vastly superior to the alternatives. Before Math.SE, there were other math fora and discussion boards. There were the Usenet newsgroups (which were message boards and should be thought of more as fora, less as a source of news), the Art of Problem Solving forums, and mymathforum. Maybe there were more, but these were what I knew.

These were each good in their own way. Usenet started a revolution but was ephemeral. If you didn't store the history yourself, you needed to hope that someone else was archiving the newsgroup you were interested in and had some way of letting you access it.2 2 A lot of these usenet groups still exist. In some ways the access problem was solved by Google Groups, which many newsgroups use as an archiver. But in other ways, the fact that Google may be the only major usenet archive means there is a single source of failure for the nearly-a-billion-usenet-messages since 1981. The more static fora like mymathform and AoPS were easier to jump into and browse (a big plus), but they depended entirely on a small group of moderators to police the community. That's a lot of work for a few people, and there was a lot of noise.

There's a problem that hit the older fora. When communities grow to a certain size, the ratio of signal to noise plummets. Maybe this is closely related to Dunbar's Number?3 3This is the number of people with whom someone can maintain stable social relationships. Dunbar proposed that this number is probably around 150. It's said that for a community to succeed with more than this number, it takes more rules and stricter enforcement The point is that it's frequently a sudden freefall. Abruptly there is almost no signal, just noise.

How do online communities fight Dunbar's Number? There are only a few frequently used techniques.

In terms of tools that online communities use to defeat Dunbar's Number, that's about it. Hopefully that's enough — hopefully there is some combination of these methods that works. Otherwise, it's all noise and no signal.

The Second Law of Community Thermodynamics

What does all noise, no signal look like? Most of the old usenet groups still exist. The main math one is sci.math, and it (perhaps astoundingly) has really high volume even today. But it's a mostly barren wasteland now. Look at this shot of the most recent content today. 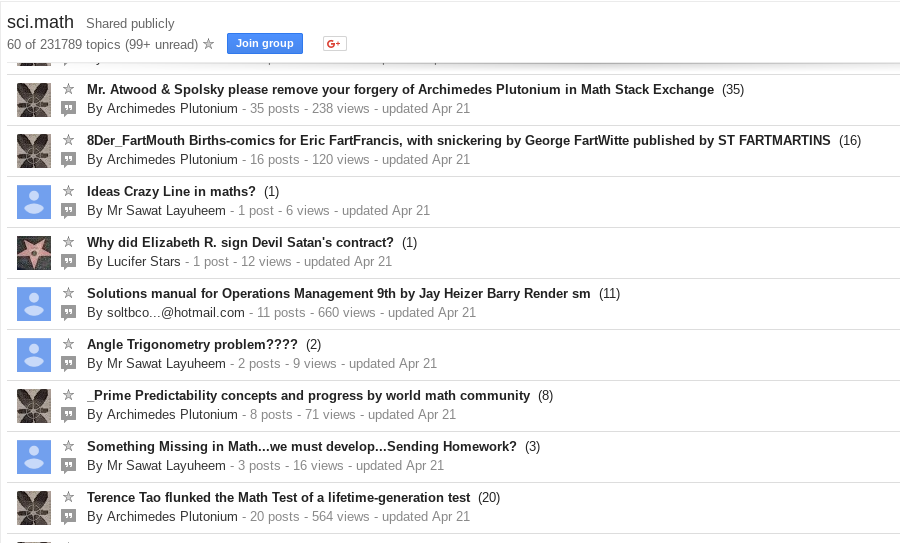 People ask for solutions manuals, complain to Joel Spolsky and Jeff Atwood about something on StackExchange (?), ask about contracts with the devil, and say that Terry Tao failed some math test. In other words, utter nonsense. It's maybe not all bad, but the signal to noise ratio is so terrible that it almost certainly drives away many many people (including me — I certainly don't read sci.math anymore).9 9It would be interesting to read a good account of the rise and fall of usenet newsgroups. USENET itself became a common source of unauthenticated file sharing — so common that ISPs dropped common support. But most of the old newsgroups like sci.math have fallen. But not all of them! sci.math.research is still pure signal. But every post is moderated, and overall it's quieter than before.

As communities get larger, not everyone can even agree on what "noise" even means. In mailing lists or current event discussion groups or book clubs or other communuties where discussion revolves around whatever is "current" and whatever is "current" is constantly changing, this can be less of a problem. But on support lists or Q&A sites like Math.SE or StackOverflow, there is a large class of users who have been around for a while and don't want to keep answering the same questions over and over, and there is a large class of users who have recently come across something they want/need help on and they really just want to find an answer.10 10Continuing the usenet footnote description... the modern internet concept of a FAQ originates from early mailing lists/newsgroups, and perhaps in particular on ARPANET's SPACE mailing list. It was presumed that new users and posters to the list would download and look through the past archives of the list before asking questions. But often this wouldn't happen, and it was tedious for others to answer the same question over and over. Some community administrators began to collect and circulate collections of FAQs to prevent some repetition. This practice quickly crossbred and continued to develop on usenet newsgroups. In the rapidly developing netiquette, it became unfavorable for users to answer questions on FAQs, as it showed that the poster hadn't done sufficient background reading to "deserve" asking for others' time in providing an answer.

This is closely related to Eternal September. For a long time, the most common users of usenet newsgroups were those around colleges and universities (access to the internet at all wasn't so common for a while). Each Auguest/September an influx of new undergraduates who were not familiar with netiquette would join, and (e.g.) ask some simple-to-an-experienced-programmer question on comp.lang.c instead of doing checking the FAQs or archives. But in September of 1993, AOL began offering usenet access to its many (and quickly rising in number) users. Thus began the Eternal September.

Maybe it's impossible for any community to be stable forever. It seems like one might conjecture a Second Law of Community Thermodynamics: the total entropy of a community will always increase until heat death. Further, heat death can have two forms: the "hot" form is spam death, where all signal is overrun by noise, and the "cold" form where any meaningful voices abandon the community, leaving only vacuum noise.11 11These aren't exclusive. One can have a cold spam death, which is a terrible fate.

But they're sure fun while they work, so it's not like that's going to stop anyone.

This is the end of the first chapter on community-building and maintenance. In the next chapter, I'll focus a bit more on Math.SE and StackOverflow, and more specifically on how Math.SE should consider the Ghosts of Forums Past.