On 10 July 1917, Donald Herbert Kemske (later known as Donald Jeffry Herbert) was born in Waconia, Minnesota. Back when university educations were a bit more about education and a bit less about establishing vocation, Donald studied general science and English at La Crosse State Normal College (which is now the University of Wisconsin-La Crosse). But Donald liked drama, and he became an actor. When World War II broke out, Donald joined the US Air Force, flying over 50 missions as a bomber pilot.

After the war, Donald began to act in children's programs at a radio station in Chicago. Perhaps it was because of his love of children's education, perhaps it was the sudden visibility of the power of science, as evidenced by the nuclear bomb, or perhaps something else - but Donald had an idea for a tv show based around general science experiments. And so Watch Mr. Wizard was born on 3 March 1951 on NBC. (When I think about it, I'm surprised at how early this was in the life of television programming). Each week, a young boy or a girl would join Mr. Wizard (played by Donald) on a live tv show, where they would be shown interesting and easily-reproducible science experiments.

Watch Mr. Wizard was the first such tv program, and one might argue that its effects are still felt today. A total of 547 episodes of Watch Mr. Wizard aired. By 1956, over 5000 local Mr. Wizard science clubs had been started around the country; by 1965, when the show was cancelled by NBC, there were more than 50000. In fact, my parents have told me of Mr. Wizard and his fascinating programs. Such was the love and reach of Mr. Wizard that on the first Late Night Show with David Letterman, the guests were Bill Murray, Steve Fessler, and Mr. Wizard. He's also mentioned in the song Walkin' On the Sun by Smash Mouth. Were it possible for me to credit the many scientists that certainly owe their

I mention this because the legacy of Mr. Wizard was passed down. Don Herbert passed away on June 12, 2007. In an obituary published a few days later, Bill Nye writes that "Herbert's techniques and performances helped create the United States' first generation of homegrown rocket scientists just in time to respond to Sputnik. He sent us to the moon. He changed the world." Reading the obituary, you cannot help but think that Bill Nye was also inspired to start his show by Mr. Wizard.

In fact, 20 years ago today, on 10 September 1993, the first episode of Bill Nye the Science Guy aired on PBS. It's much more likely that readers of this blog have heard of Bill Nye; even though production of the show halted in 1998, PBS still airs reruns, and it's commonly used in schools (did you know it won an incredible 19 Emmys?). I, for one, loved Bill Nye the Science Guy, and I still follow him to this day. I think it is impossible to narrow down the source of my initial interest in science, but I can certainly say that Bill Nye furthered my interest in science and experiments. He made science seem cool and powerful. To be clear, I know science is still cool and powerful, but I'm not so sure that's the popular opinion. (As an aside: I also think math would really benefit from having our own Bill Nye).

When Bill Nye was preparing his team for the show in 1992, he distributed a sheet of paper that contained the objective of the show: Change the world. 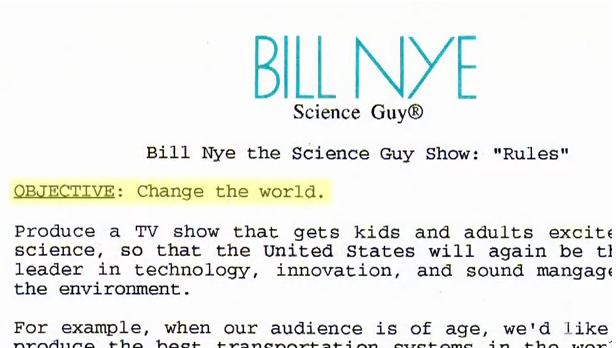 Bill Nye talks a bit about the start of the show, and his plans to Change the World, in this youtube video Bill Nye: Firebrand for Science - Aims to Change the World. He talks about his conscious decision to inspire further generations of scientists (He inspired me!).

Bill Nye is still very prevalent in the science community, and still does his best to inspire. He's also the CEO of the Planetary Society. He talks at graduations, at conventions, at schools, on tv. Really, he does whatever he can, wherever he can. I've twice had the chance to meet him in person, and he's thoroughly motivating in person. He's also a great storyteller. (This video of Bill Nye speaking at ASU shows both his passion for science and his skills of storytelling, as well as being motivational and an inspiration to Change the World. It's perhaps my favorite video of him that I've seen).

So I have a question: why is it that 20 years after the initial debut of the show, we still show 'Flight,' the first episode of Bill Nye the Science Guy? Surely part of it is because it's just so good (and that he said they deliberately focused on science instead of technology, so that the show would stand the test of time). But it wasn't the most-watched show of its time, nor the show with the highest production value. But I have a theory, a theory well-stated by Hank Green in one of his famous vlogs (he's one of the Vlogbrothers who, while we're talking about inspiration, is one of the groups that inspired Vi Hart to begin her extraordinary set of youtube videos "Doodling in Math Class", incidentally one of the closest treasures math has to a Bill Nye at the moment).

People certainly love both Bill Nye and his show. And Bill is also always looking to go that extra yard to connect with the viewer.

How does Bill Nye compare to the top 25 watched shows of 2012-2013? Of them, there are 8 reality tv shows, 2 sports shows, and 9 crime/police procedural dramas. Other than these, two remain from the top 10: The Big Bang Theory (which I enjoy, but always feel guilty about liking because of its incredible reliance and perseverance on nerd/geek stereotypes) and The Walking Dead (which I hear good things about, but have never watched).

This reminds me of some little-known trivia.  What was the first reality tv show (in the modern sense, not the candid-camera or novelty-act type), and on what network did it air? When I was first asked this question, I thought of The Real World. But in fact, it's An American Family, which aired on PBS in 1971. Isn't that funny?

There is a concept called "channel drift" or "network decay," which is 'the gradual transition of a television network away from its original programming focus to either target a more lucrative audience or to include less niche programming' (which I took straight from wikipedia). Although the term may not be common, complaints about it are - and they tend to be complaints about reality tv. My favorite example is TLC, what was once known as The Learning Channel. TLC was founded in 1972 by NASA and a publicly funded instructional network focused on providing real education through tv. At first, it was distributed at no cost by NASA satellites. It was privatized in 1980, and it began its slow transformation from providing free educational programming to the network that carries Here Comes Honey Boo Boo, a show widely considered exploitative and depraved, and absolutely no educational programming.

In fact, some argue this is occurring to other channels (some say essentially all such channels) largely thought of as 'educational' in nature. To highlight a few, Animal Planet's highest ratings came from a two hoax specials about finding mermaids (completely fictional documentaries); Discovery's single largest audience was for the 'mockumentary' Megalodon, speculation about the existence of a giant prehistoric shark in the waters today. Or the History Channel, which once showed history, or SyFy, which once showed (and was called) sci-fi, or MTV, which once had music (instead of Jersey Shore, another weirdly faked reality tv series). The list goes on.

I don't know what to say or think about channel drift. But I do know that it reminds me of the importance and consistency of PBS, a network that can continue to focus on lasting content that gets loved, instead of gratifying content that gets views. The Boston Globe writes that PBS is doing better now that channels that once provided educational content have drifted away. Viewers once again see that PBS provides a service that non-public stations cannot, or at least choose not to, match.

I really like Bill Nye the Science Guy (and NOVA, and many other science programs available on PBS) and I want to be able to continue to enjoy them, or be inspired by them, or inspire others with them, for years.

There's one final cog in this story that completes a circle. In one week, the next season of Dancing with the Stars will start. Among the contestants are both Snooki, a character/person famous from Jershey Shore, and Bill Nye, likely with a new set of bow ties. Bill writes in a blog that he does this as the CEO of the Planetary Society and as a student of Carl Sagan. In other words, it seems Bill will be trying to bring inspirational messages and support of science education and funding to the main networks on his own.

As unusual as this may seem, I believe we can broaden awareness of the Society and thereby humankind's exploration of the Cosmos one ballroom dance at a time.

I may not understand, but I want to believe. Because it's Bill Nye, who inspired me and so many others, and he wants to, dare I say it, Change the World.

Happy Birthday Bill Nye the Science Guy (the show's 20 now!), and to Bill, I wish all the luck I can.