I read an article from Doug Criss on CNN yesterday with the title “Hawaii’s governor couldn’t correct the false missile alert sooner because he forgot his Twitter password.”1 It turns out that Governor Ige knew within two minutes that the alert was a false alarm, but (in the words of the article) “he couldn’t hop on Twitter and tell everybody — because he didn’t know his password.” 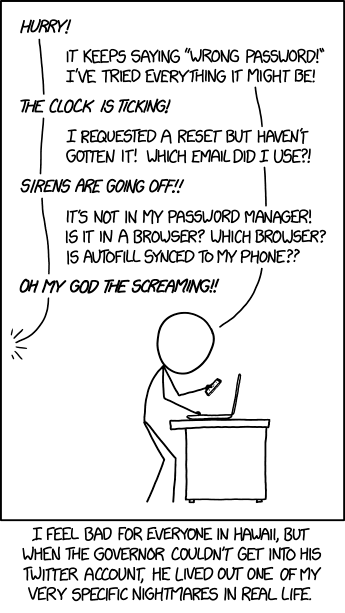 As for Twitter, I wonder whether or not a sarcasm filter has been watered down between the Governor’s initial remarks and my reading it in Doug’s article for CNN. It seems likely to me that this comment is meant more as commentary on the status of Twitter as the President’s preferred 2 medium of communicating with the People. It certainly seems unlikely to me that the Governor would both frequently use Twitter for important public messages and forget his Twitter credentials. Perhaps this is code for “I couldn’t get in touch with the person who manages my Twitter account” (because that person was hiding in a bunker?), but that’s not actually important. END_OF_DOCUMENT_TOKEN_TO_BE_REPLACED

Posted in Politics, Story | Tagged Parable for the Nuclear Age | Leave a comment

I’m in San Diego, and it’s charming here. (It’s certainly much nicer outside than the feet of snow in Boston. I’ve apparently brought some British rain with me, though).

I describe my general approach of transforming this into a question about the behavior of modular forms, and then using spectral techniques from the theory of modular forms to understand this behavior. This becomes a question of understanding the shifted convolution Dirichlet series
$$ \sum_{n \geq 0} \frac{r_{d-1}(n+h)r_1(n)}{(2n + h)^s}.$$
Ultimately this comes from the modular form $\theta^{d-1}(z) \overline{\theta(z)}$, where
$$ \theta(z) = \sum_{m \in \mathbb{Z}} e^{2 \pi i m^2 z}.$$

Here are the slides for this talk. Note that this talk is based on chapter 5 of my thesis, and (hopefully) soon a preprint of this chapter ready for submission will appear on the arXiv.

On a day when President and Commander-in-Chief Donald Trump tweets belligerent messages aimed at North Korea, I ask: “Have we seen anything like this ever before?” In fact, we have. Let’s review a tale from Reagan.

August 11, 1984: President Reagan is preparing for his weekly NPR radio address. The opening line of his address was to be

My fellow Americans, I’m pleased to tell you that today I signed legislation that will allow student religious groups to begin enjoying a right they’ve too long been denied — the freedom to meet in public high schools during nonschool hours, just as other student groups are allowed to do.1

My fellow Americans, I’m pleased to tell you today that I’ve signed legislation that will outlaw Russia forever. We begin bombing in five minutes.

This was met with mild chuckles from the audio technicians, and it wasn’t broadcast intentionally. But it was leaked, and reached the Russians shortly thereafter.

They were not amused.

The Soviet army was placed on alert once they heard what Reagan joked during the sound check. They dropped their alert later, presumably when the bombing didn’t begin. Over the next week, this gaffe drew a lot of attention. Here is NBC Tom Brokaw addressing “the joke heard round the world”

The Pittsburgh Post-Gazette ran an article containing some of the Soviet responses five days later, on 16 August 1984.2 Similar articles ran in most major US newspapers that week, including the New York Times (which apparently retyped or OCR’d these statements, and these are now available on their site).

The major Russian papers Pravda and Izvestia, as well as the Soviet News Agency TASS, all decried the President’s remarks. Of particular note are two paragraphs from TASS. The first is reminiscent of many responses on Twitter today,

Tass is authorized to state that the Soviet Union deplores the U.S. President’s invective, unprecedentedly hostile toward the U.S.S.R. and dangerous to the cause of peace.

The second is a bit chilling, especially with modern context,

In 1984, an accidental microphone gaffe on behalf of the President led to public outcry both foreign and domestic; Soviet news outlets jumped on the opportunity to include additional propaganda3. It is easy to confuse some of Donald Trump’s deliberate actions today with others’ mistakes. I hope that he knows what he is doing.